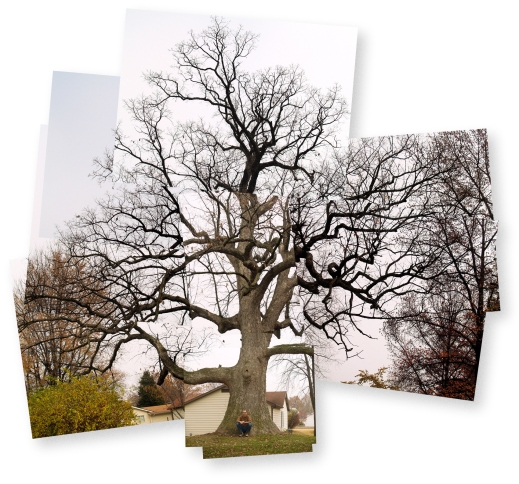 I drive by this tree often, and I have always admired it. For years, I thought that I would take some artsy photos of it and hang them on my wall. I wasn’t sure how to handle the houses in the background (besides photoshop), so I never did it. The other day it was very foggy in the morning, which made the day seem more like England than Missouri, and it just felt like it was time to take some photos. The fog was getting thinner when I started shooting and what was there really added nothing to the event, but I went ahead anyway. I expect I will be back again under different lighting conditions and maybe at different times of the year.

This white oak is right next to a large four-lane road in a back yard. It is easy to see, but not super obvious,since it is in a small opening with trees on both sides. My attention was first attracted by the shape of the base, which is unusually tapered, especially for a white oak. White oaks get big, but they usually have much less taper in the base. Trees that grow in the woods specifically, are much more consistent in diameter, while his one, which grew in the open, flares out like crazy. It is such an unusual shape that I had to drive by several times before I agreed with myself that it was a white oak. This is an old tree, and I think that wide base has served it well.

While the base is uncharacteristically white oak, the top is textbook. The branches are big and crooked and there aren’t a lot of them. It looks creepy, like it should be in front of a haunted house (where any self-respecting white oak would be found). I can’t help but feel like the tree is just going to reach out and grab me.

While I usually picture myself cutting down trees or making them into lumber or a project, this one I only envision standing. I look at it, and besides the fact that I wouldn’t know where to start, I just don’t see cutting it up. I think about moving it to my backyard, so I can build a treehouse on that giant first branch. Then, I think about getting a new house with a bigger back yard, so it will actually fit. After I settle in to my new house I would put up a swing on the other low branch. Then, of course, I would enjoy a fresh pot of honey from the happy little beehive that resides in the nubby almost-healed-over branch right outside the tree house (directly above my head in the photo below).

And, after I finished my pot of honey, I would think to myself, “This is the most awesomest treehouse tree ever!” (even if it has houses in the background and isn’t in my yard).

This tree is even bigger than it looks like from the road (I am not a tiny person).

Hi! My name is Scott Wunder and I am the owner of WunderWoods Custom Woodworking. We build wine cellars, built-ins and furniture from local woods, here in St. Louis, MO. Recently, I finished a three-year term as the President of the St. Louis Woodworkers Guild, which had me writing a monthly article for our newsletter. I love to write, especially about wood, and found that I still had more to say. Every day I run into something wood related that I realize some of my customers don't know and this seems like a great forum for sharing what I have learned (instead of telling the same story to each person). The main thing to remember is that I try to keep it light and as my wife always reminds people that have just met me, "He is joking."
View all posts by wunderwoods »
« Previous post
Next post »

3 responses to “Most Awesomest White Oak Treehouse Tree Ever!”

Store and Shop Information and Hours

We offer local high-grade hardwood lumber milled by us. All lumber is rough sawn with surfacing available at the standard shop rate. We have green lumber, air-dried and kiln dried lumber as well as lower grades available. Because we love wood, we have a lot of very interesting stock.  From spalting, to curly grain as well as wacky shaped pieces and unbelievably gorgeous slabs.

We are open for retail sales of lumber and slabs from 8 a.m. – noon on Saturdays and by appointment during the week. If you are interested in custom work, please call for an appointment. Scott can be reached at 314-574-6036.

Siberian elm is one of our favorites, and it’s easy to see why, in this book matched dining table we just delivered. #siberianelm #elm #liveedgetable #liveedge #diningtable
Check out our latest single slab walnut table! This one is a standout because of the curly figure, which wasn’t very evident until it was finished. #walnut #diningtable #liveedgeslab
The pedestals are complete and delivered. They ended up much smaller and would have fit on our lathe at this point, but it was still cool to cut the bases and capitals on the cnc. The cnc was also helpful to cut out all of the round parts with center holes for alignment. #pedestal #artbase #poplar #ineedanothercnc
Just a little stone work on the walls and this red elm bar area is complete. We did the bar top and the floating shelves. The homeowner did the rest. #redelm #elm #elmrevolution #bar #bartop #liveedgefurniture
Final pass on a collar for a column/pedestal. This one is small enough to do one the lathe, but then we wouldn’t get to use the cnc.
Jeff built a sled jig for the table saw to do a turning that was a bit too big for our lathe. It worked great. The coolest part was the shavings it produced, which stuck like Velcro and formed into perfect wood snowballs. #snowday #lathe #poplar

What’s Going on at WunderWoods 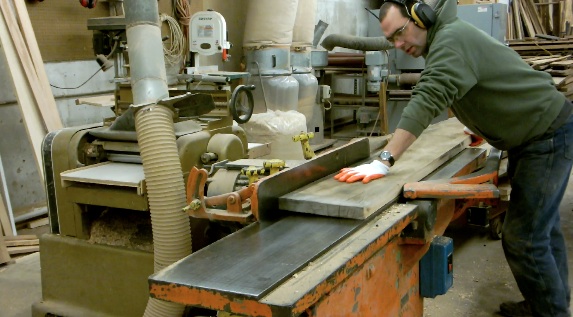 Everyone always asks what I do. Here's the answer. Click on the photo above for a short video tour and see all of the steps it takes to go from a tree to finished furniture.